Had a great but busy past weekend; my cousin Daniel drove up to Boston to hang out, as he is currently on winter break from school. He's awesome, so I figured we wouldn't have trouble finding fun things to do, and I was right: technically, we didn't really do anything, but I still had so much fun (despite a bout of grumpiness that struck on Saturday night).

Friday evening, cuz & I hung out and ate Hickory Farms cheese & crackers (courtesy of Dan's "Cheese Grandparents", as Bethany's dubbed them) until Dan came home, all excited about making a trip out to Micro Center! Since the 3 of us are big geeks, we thought it would be such a fun thing to do on a Friday night, so we headed up to Cambridge. We had quite the time wandering the aisles (my Dan was building a server), although I was terribly disappointed that they no longer carry Game Developer magazine (not that I am one, but it's always been a pipe dream of mine...). Anyway, everything was successfully purchased (or so we thought; some components turned out to be problematic, but that's another story), so we went back to the North End to drop everything off & meet Bethany for dinner.

Another disappointment quickly cropped up, when I realized that our favorite Chinatown restaurant, Gourmet Seafood, looks like it is no longer! :( I was so upset; I was really looking forward to their spicy green beans, calamari, and bok choy. We don't know what is up; there was scaffolding all over the place, and it looks like renovations are being done on the building that housed it, but we're not sure if it is temporarily out of service, or permanently! Sigh. In any case, we ended up across the street at a perfectly fine (but not nearly as good) substitute, where we shared an entire duck, among other things. Needless to say, we were stuffed as we left.

The 4 of us returned to the apartment, where I tried to both help build the new machine and hang out with Bethany; I ended up not getting to work much on the computer, but it was a nice night. We were all exhausted when we finally went to bed.

Saturday when we all finally woke up, I ran out quickly to pick up some supplies and then cousin Dan made us all orange medallion pancakes, yum! 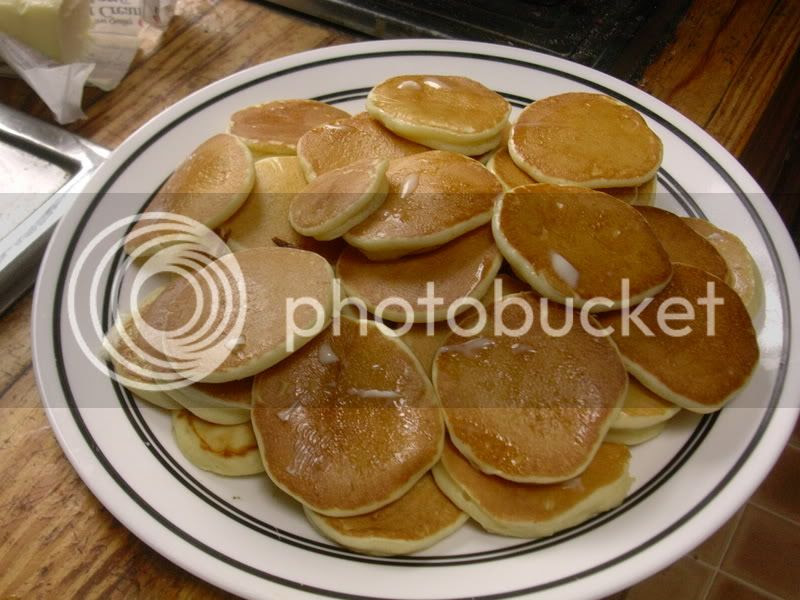 Cousin Daniel's awesome pancakes
We had a long breakfast, and then Bethany, cuz, and I headed out to do some more errands: Haymarket & the local small grocery store to pick up ingredients for the dinner we were planning that evening. My cousin wowed us again with his culinary skills, making both an artichoke dip and an unbelievably good pumpkin cake! He & Bethany (with some crust help from my Dan) made a couple of strange-but-good pizzas for dinner, as well, and then we just kinda all hung out for the rest of the evening. Low-key, but I really enjoyed it (when I wasn't in a bad mood!). 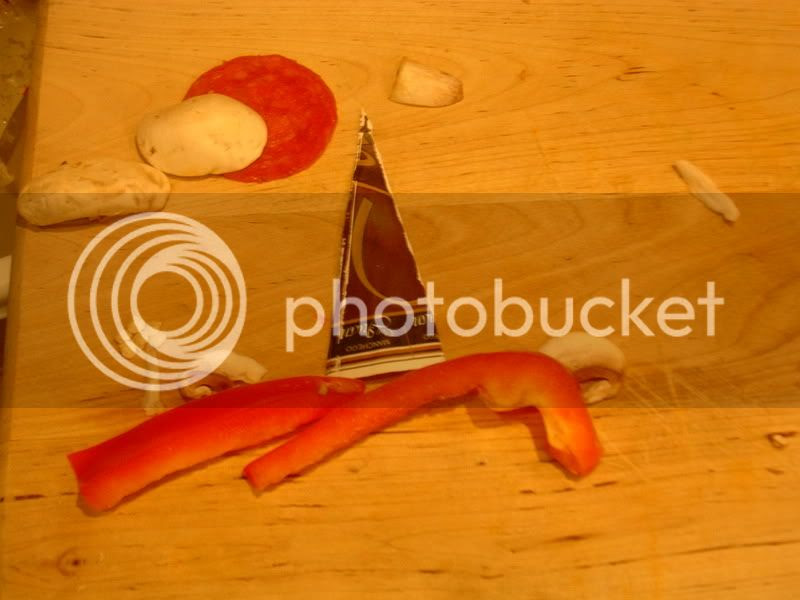 Bethany made some food art while we waited for dinner to cook
And on Sunday, my cousin & I went to see The Children of Men, which I thoroughly enjoyed. I want to take my Dan to see it, now! It was very engaging, and I just loved the premise of it, and all of the ramifications on our society that it would entail. Anyway, I suggest that you all go see it if you haven't, especially if you are a fan of futuristic sci-fi movies like Minority Report, for instance. I don't know what I'd liken it to, but I did really enjoy it. And I don't even really like Clive Owen!

When we got back from the movie, I had to say goodbye to my cousin and book over to Brookline to make my CodePink meeting in time. I was surprised to see that I was only the 3rd person there, so it was a rather quiet meeting (only 5 people all told, probably because of the weather & long weekend), but it was rather nice. We got a lot of talking in, which we really needed.

So, I feel like the weekend was packed, even though we didn't really actually do much! But I really enjoyed the visit. I just also have been feeling lately like I'm a nonstop eating machine, and all the delicious food we consumed over the weekend certainly didn't help! But, I guess I'll just have to try to be a bit more disciplined now that it's just me making my food decisions, again... =\

Okay, gotta get back to work! xo