Just got back from an anti-war rally in the Boston Common...it was freezing, but fun. The CodePinkers I was supposed to meet up with never showed up (or at least I never saw them), but I stuck around for a while, anyway. There was a great atmosphere of gaiety surrounding the whole thing, despite the somber anti-war message - whenever groups of like-minded people gather, I think, there is a special cameraderie that really makes everyone feel good. Like that there are other people out there who share their ideals and want to fight for them.

In any case, there was a pretty good band playing on the gazebo when I arrived, and then there were a few speakers. The first guy who spoke was someone who had been arrested at a college recently (I didn't hear which one, because I was too busy scanning the crowd for CodePink girls), and who turned to the dozen anti-anti-war protestors (hehe I should say the counter-protestors, but I like my term much better) and told them to all go march over to the recruitment center across the street and sign themselves up for the military. Everyone (save for the counter-protestors) cheered, and then the guy went on to talk about his arrest and how he was maced at a peaceful demonstration to protest (I think it was) racist policies at the school. After he spoke, a woman who said she normally spoke for the poor came up and had some good words to say; she mentioned that her mother (age 85) had commented to her recently that she had lived through too many wars in her lifetime. The woman responded to her mother that at least she had missed the Civil & Revolutionary ones, heh.

As another folk singer geared up to play, I turned around to head home, pretty disappointed. I would have stayed longer by myself, but I was *freezing* in only a t-shirt and sweater; had there been other pink women to stand with as there should have been, I would have stuck around despite the cold! But as I was all alone and not making much difference, I figured I should get out of the cold before I lost my feet. On the walk back, the snow that had been lightly drifting down all morning got a little bit heavier, and although it's way too early (!), it was pleasant to walk back in the light swirls. I'll definitely enjoy the first few snowfalls, I always do. It's when there have been 80 and the ground snow is all brown and slushy, when it gets bad. Bleh.

Oh, and I also finally got to try Finagle's pumpkin-raisin bagels. Mmm.

All right, I'm gonna watch a movie & knit some, and then I have some baking to do this afternoon (pumpkin pie, blueberry muffins, and apple cake) before we get all dressed up to go to Mike's party this evening (in Salem! ooo!). 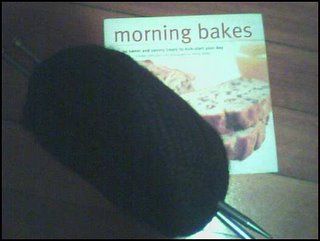 I checked out that protest. Saw some anit-abortion/anti-gay marriage protesters, some gay rights advocates. Why are big banners always facing IN, rather than out, where passers-by can see them? Rather confusing for me until the Socialists selling papers told me which protest it was.

Then I took my frozen self home.