I just got back from a lovely crepes lunch with my mother and grandparents (her parents) for my mom's birthday. It was a very cool place, but I was quite pissed off by this asshole who thinks they own the world, or at least are the only one in it: 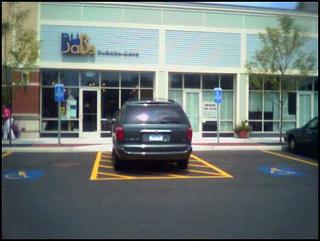 What do they think, that those yellow hazard lines are there for decoration? They are probably the stupid people that think "why do lucky handicapped people get all that space and the rest of us have to park so far away? duuuhh", followed by some drool coming out of their mouths while they ponder this perplexing question. I don't know, jerk, maybe, just maybe, handicapped spots give the people that park there room to get their wheelchairs or their crutches or their canes out of the car??!? What the hell. Now if a handicapped person with a wheelchair shows up to eat some crepes, they can't park there because you felt the need to be a big asshole. Very good.

Yes, I get a bit impassioned about that kind of stuff (oh by the way, I checked - there was NO handicapped sign either on their rearview mirror OR on their license plate), but I not only was handicapped (on crutches) for several months myself - which is doable without a handicapped spot, and I would often forgo taking advantage of my placard - but I have a friend who is in a wheelchair, and I feel fiercly protective of her. She's already so fabulous, and incredible to me, so I am sure she could do without the parking spot there. But why should she have to?? Besides, that jerk looks to me like they'd be the same person who would park in a handicapped spot when it was the last one, forcing Tanya to have to park 5 miles away. Believe me, it's happened. Ugh.

That also reminds me of the time I head some stupid college jock guy complaining about the new "maternity" parking spots that seem to be popping up in many places, offering expecting mothers a chance to not have to walk so far. The stupid jerk made some comment about how his mother did just fine without those when he was young. I really wanted to turn to him and say "okay buddy, YOU try walking around with another human being in your belly and see how that feels! and, by the way, it's too bad that she made it to term with you in the first place - it's too bad she didn't miscarry while she was hiking across the parking lot to get her groceries one morning!" Haha okay so that last part was a little harsh, but I didn't even say a single word when he was around (I always wish I had more guts than I do), so now I get to really have at him, haha.

Well, I have to get back to work, but I just felt the need to rant about that. Oh, and don't worry, I didn't finish both of the 2 books that I started reading just the other day - I just realized that I have to read another one first because it's a new book, and thus can't be renewed (and is due earlier than the others). So, I unfortunately had to put the others on hold. I will definitely return to them directly after I am done with the Weiss & Hickman one.

All right, ciao for now!