Friday: I have added another movie to my list of favorites: Mr. Deeds Goes to Town. Just adorable. (The part where Gary Cooper runs away from Jean Arthur after giving her a poem he wrote, tripping over everything in his path like a nervous little boy, is just priceless. And I love what he decides to do with the money. It made me cry.) Also that night, the shower broke. Yes, again. We are waiting on our landlord, who has been very understanding, but as it was a weekend, there wasn't much that could be done. Sigh. (It's useable, thanks to Danny -- but just barely. We really need to get it fixed.) A little later on, Bethany & Ashu came over to watch Napoleon Dynamite (Ashu had never seen it before, and just loved LaFawnduh and Napoleon).

Saturday: I didn't do any of the things I had planned to do, but I accompanied Dan to his hair appointment at Shag, and later on we joined Ashu & some of her work friends at Caffe Vittoria to watch the Italy vs. USA game. Dan & I had purchased Italy t-shirts (mine is adorable, with rhinestones on each "i" in the word "ITALIA" -- maybe I'll get a picture up here soon). It's a good thing it was a tie game, if only for the people in the cafe with us -- half were rooting for the U.S., and half for Italy. It was quite a back-and-forth game! Later on, Dan & I watched The Boondock Saints (neither of us had ever seen it before; it was fantastic). Wow, I did a lot of movie-watching this weekend....

Sunday: I woke up around 9 in order that I could meet Karen a couple hours later at the Broadway T stop, so we could go to the South End Open Market. It was so cute; I definitely want to go back! But it was hot, so we didn't last as long as we might have. That, and we are both pretty broke at the moment, heh. So, we headed back to Karen's new place (after a few setbacks with various train-breakdown problems), which is so great. Her roommate has a very fun style, and Karen has a really sweet room. It started off white, and 2 hours later (despite the sweltering heat!), it was a fantastic, cheerful shade of "honeydew melon" (the picture does not do the color justice, sorry!): 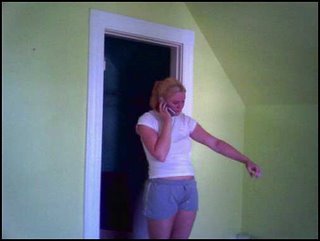 We were so proud of ourselves! We definitely earned those beers we had a little later on at Redbones, where we met up with Dan for a fantastic (and very filling) dinner, yum. I think the heat & the day's work had exhausted me, though, because I ended up with a pounding headache on our way back home. I crashed almost right after we walked in the door. Ugh.

Have you seen those fliers about the flithy tenants who are partiying too much and bringing a rat problem into the neighborhood?
My boyfriend/ partner/ whatnot told me about them. Seems pretty absurd. I mean, maybe they're rats because there's so many restaurants in the neighborhood? Just a thought. :P

YES! I actually just saw one posted the other day and I thought they were *hilarious*! I can't believe it...I am SO curious to find out what this person is like. Paranoid, for one thing... I agree with you: I mean, I know some people are bad about their garbage, but I'd guess there are other things besides "filthy neighbors." I'm sure there have always been & will always be dirty people. If the person who posted the fliers are seeing more rats in their house, maybe it's THEIR personal problem...? Heh.

That's a weekend of good movies, I'm jealous. I'm a big Boondock Saints fan. Although I watched Kiss Kiss, Bang Bang the other night which was very interesting and worth watching (if not an all time favorite), so I can't complain too much.

Btw, I sent you an email a few weeks ago, but it was to your vassar email address; hope you still check that!