Okay, I'll make this quick, because I've been so delinquent!

Sunday I spent with my mother in CT, which was really nice; Dad was away for the weekend, so we got to have just Girl Time. We visited my grandparents for a bit, and then mostly hung out around the house. I had hoped to see some CT friends, but couldn't get ahold of any of them, but in the end I wasn't too disappointed (in that I enjoyed my time with my mom).

Monday morning I ran some errands, and then that afternoon we headed down to Bridgeport to take the ferry over to Port Jeff. Sarah's graduation from her residency program at Stonybrook was really nice; it was held in an event hall that I'd guess was normally used for proms & weddings, and it was decorated very nicely. Apparently they even used the same caterers as a wedding Bethany & Kevin had just been at the day before! The food was good, although for some reason I wasn't all that hungry, and the ceremony itself was very sweet -- very personalized, because there were only about 20 people graduating. We got back to CT late that night, and everyone promptly went to bed.

Tuesday morning, Marsha & I caught a bus from Hartford back up to Boston; she was on her way to catch a flight out to California (I'm so jealous!). So we traveled over to the airport together and spent a lovely morning catching up. Oh, how I'll miss her! (Even though I only got to see her for half a day...) I hope CA + Marsha = a success!

Otherwise, this week has been pretty low-key (which is good, cuz I'm almost totally broke, hah). Last night I watched Murphy's Romance (it was cute) and knitted up the rest of a baby sweater 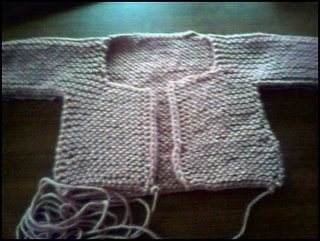 that is, apparently, 14 rows (!) short somehow. (But I still think it looks okay. I plan to knit another one, so I'll see what went wrong in the pattern.) Dan & I also made some more pasta sauce (because the tomatoes I had bought at Haymarket were starting to go bad!), which is always some of my most favorite time -- cooking in the kitchen together. Unfortunately, I didn't start until about 10pm, so it ended up running kind of late, but I transferred it to the crock pot and since then it's been bubbling along merrily.

Tonight I've got a book club meeting, which is unfortunate because I'm only about 18 pages into the book. Oops! Good thing it's non-fiction, so I don't have to worry about someone spoiling the ending for me... :) Mostly I just go to join in some good talks with the girls about feminist-y things, which are always really energizing.

But for now, it's time for me to hop in the shower. Have a good day, everyone! xoxo