So, again, here are several things I wanted to post about pre-holidays, but couldn't manage (damn you, computer) to do before I left for CT. Sooo, much-belated, here:

1. The PAO shadowbox my father made for me - he's awesome! These are the actual screws that were in my hip following my periacetabular osteotomy in April '04; they were removed in May '05, and I wanted to keep them as a souvenier, of course! So my father suggested making a special display for them...the frame is a small one (I think something like 5"x7" or 5"x8"), but you can still see how massive those screws were! I placed a 2-inch paperclip on the glass for perspective... 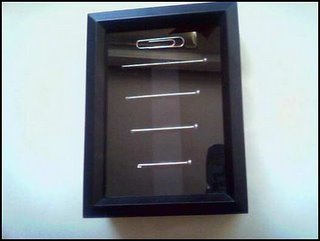 2. My first foray into cable knitting (it's really fun!) - in the form of a red scarf that I am knitting to donate to the victims of Katrina. These pictures are close-ups of detail of the first few minutes of working on it; since then, I have completed that one (after much labor!) and started a newer, much simpler one. I will try to take pictures of the finished cable scarf & get those up here soon, as well... 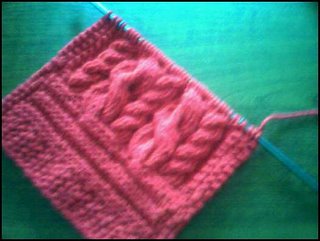 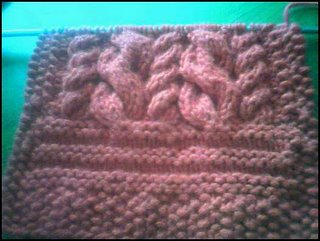 3. A funny story about me doing something stupid: While I was back in CT for something or other (I went back several times in the past couple of months, for various reasons), I was headed out to meet my friends at Zen Bar for a bit, and on the way stopped at the local Bank of America branch to withdraw some cash, as I had none on me & would have to pay cover. So I pulled up to the ATM and paused for a second, drinking it all in - it was an entirely new machine, very classy. It looks like the future ATM of all BoAs; pretty impressive! So, perhaps it was the new machine that threw me off, but I think it was my own stupidity (you'll see). So I pulled out my card and put it in the machine, watching in wonder all the buttons and the amazing-looking touch screen, etc. I went through the normal (rather mindless) motions of withdrawing $40...that is, until I saw that they were going to charge me $1.50 to withdraw money! I was outraged - they can't do that! This IS my bank, isn't it?? Are they going to start charging fees to pay for all of the new ATMs?!? ...And then it occurred to me - maybe I had put my credit card into the machine instead of my debit card...yup. That was it. Red-faced, and so grateful that no one else had seen the little episode, I quickly withdrew my money, got back in the car, and promptly spent several minutes laughing at myself. Ah, I can be slow sometimes...thankfully usually not regarding things that really matter...heh.

I have to go do work now. I know I should update more often. I will try to. xoxo

woah!! i remember seeing that box the other day and thinking it was cool. little did i know those were actual screws that we for your hip. that is crazy!

Thanks for the encouragement. I guess I know that when the time comes, I'll be as strong as I need to be.

I love the shadowboxes of your screws, by the way. Very cool! Glad you don't look back on your surgery and cringe ... that's something, right?

Thanks again, and take care!
Cassie