So, after years of making tentative plans with people to go to a show, I finally got to see Movin' Out last night. And um...yeah. Please remind me next time that I don't really love musicals. Or maybe it was just that one. I have only been to maybe 3 musicals in my entire life, so I can't remember, but don't the actors ever speak? Or is it all singing? And, even if it is in fact all singing, don't the actors usually do the singing, instead of one guy performing everything? Granted, I realize they wanted to keep consistency (in this case, keeping consistent with someone who sounds as close to Billy Joel as they could find), but still. He wasn't Billy Joel, and that was obvious, so I almost would have just preferred to hear the performers singing the tunes. I dunno...it just didn't do it for me. I won't go into it any further. I just wasn't too thrilled with the show. As Dan pointed out, they also butchered some of the songs, and the choreography wasn't too thrilling (although the dancers were impressive). I guess I just expected too much, knowing that it had won numerous awards & much praise. It didn't really win my heart. I'm not really a musicals kinda person, though; maybe that was my problem, to begin with...

Anyway, a few hours ago, I attended another show...this one a concert, and I watched it from the comfort of our roof! There was some sort of performance being put on by a group of schoolkids in the yard of the Old North Church. I tried to discreetly snap a photo: 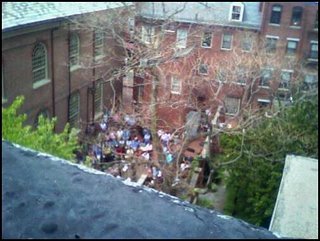 The music was impressive, considering it was performed by children all younger than 15! And it was quite a pleasant surprise to get to "attend" an unexpected noonday performance in the middle of a workday. Not bad.