Yeah...I know this is way old news! But I'm trying to catch up on some old posts I wanted to do. Thought I'd share a fun picture from the NYC march that I did with some CodePink ladies...I designed that banner! (And helped color a lot of it in.) I'm standing right behind "pink": 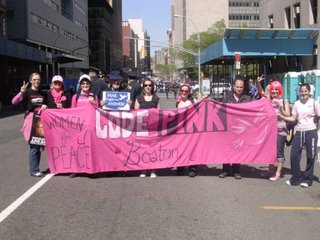 Sally (the one in the pink wig, there) & I traveled down to NYC on the Fung Wah bus (such a good bus system between the 2 cities!), and arrived around 10:30 in Chinatown. We wandered towards Union Square (I think -- I'm so bad with place names in NYC!) and dawdled a bit here & there. When we arrived at the march there were so many people; it was unbelievable! We didn't have any trouble spotting several CodePink groups, though, as they were all decked out in their brightest shades! :) We joined up with a few (and several people from our delegation). Somehow, Sarah and I managed to locate each other, which rocked, even though it was for an unfortuately short amount of time! But still -- it's always tons of fun to protest with that girl! :)

The march started, and for about half of it, I was signless & bannerless...we couldn't for the life of us locate the women who had brought the banner down! But out of the blue, like an angel, Trish arrived carrying it! We unfurled it & were quite a hit, between our banner (which even Medea, one of the CP founders, appreciated!) and Sally's hot pink wig! The march was great fun. It's always fantastic to be surrounded by so many like-minded people. There was quite a happy & playful atmosphere.

When the march was done (I believe we arrived in Washington Square, but again, don't quote me on that...), Sally & I were exhausted and starving, so we headed to nearby Chinatown for some yummy dim sum.

When we were done, we decided to race to catch the 4 o'clock bus back (which we barely made; it was quite the adventure!), because we just couldn't wait to get back home & sleep. I was disappointed that I didn't get to see a single New York friend (I had contacted several about getting together, but we didn't manage to meet up!), but it all worked out, because I've planned to make another visit (or 2) specifically to visit them. It'll make things easier on everyone, that way.

Anyway, that's all for now. I've got several other things to catch everyone up on, but I'll leave off here for now. xoxo