To finish up the weekend post quickly, Saturday night was DiRo's pirate party up in Salem, and Dan decided to stay in, so I caught a ride up north with Brian, which was a lot of fun -- it's been ages since we've really gotten a chance to talk. We caught up on everything regarding ourselves, our families, and our friends. I can't believe sometimes that I've known these guys since I was 15 -- that's 10 years. Wow.

The party itself was pretty fun, and I got a little drunk but nothing bad...I remember everything that happened (which is no surprise, really, as I've never blacked out!), particularly talking a lot with "the guys" while the girls (their wives/fiancees) did girly things, heh. And then chatting with 2 very nice girls who hadn't known Mike very long. And I remember looking at my watch, and noting that it was 12:30...and then getting in the car with Brian & exclaiming about it being 2am. I didn't forget what happened in those 1.5 hours, I just didn't realize so much time was passing when we were all talking! I guess it's been a while since I've been to a party...particularly one where I was so comfortable, and either knew everyone or wasn't intimidated by not knowing some. I hope my upcoming birthday gathering (that I hope to have) will feel that same way....

Sunday morning was spent sleeping in (a rarity for me, although usually I'm not up that late, either), and then rushing around frantically trying to get the breads baked before my meeting (which I was an hour late for; shame on me!). I also squeezed in a bit of knitting and watched some of what was once (when I was about 11) my favorite movie ever, My Girl! As always, it made me cry, but it's definitely no longer a favorite. Just a good, cute movie. 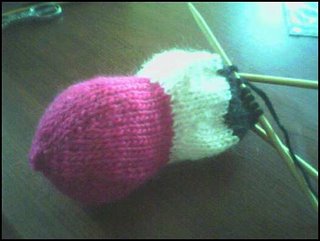 Oh, and here's the torso and partial head of the Jess Hutch doll I've been working on; I'm sort of stymied until I head to Windsor Button today to pick up a pair of safety eyes, since I failed to procure those before I started (and was quite frustrated with myself that I was stopped mid-project because of it!). I hope to get some more done tonight, after the WB run. I'm making it for the baby of a friend of my sister (did you follow that?).