I wrote this like a week ago & thought I had posted it, but I never did - so, here:

And okay, I promise this is the LAST tidbit from One-Night Stands with American History:

In 1896, Henry John Heinz was riding on an elevated railway in New York City when he saw an advertisement for twenty-one varieties of shoes. The sign gave him an idea. He would advertise his own company's products with a number - any number, so long as it was catchy. Finally he decided upon fifty-seven, which he believed people would remember. The number itself was meaningless, of course. Even in 1896 the Heinz company sold more than fifty-seven varieties. 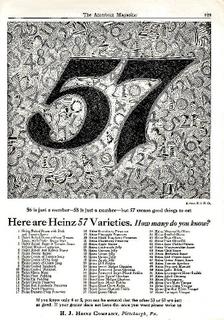 (photo borrowed from this site)

[The Heinz website says that the numbers "5" and "7" were actually significant to Heinz and his wife, but goes into no further detail. The point remains that the number was entirely arbitrary with relation to their products.]

I'm returning that book to the library now, just in case I have the urge to share even more! xoxo