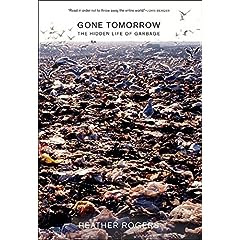 Yesterday I went out to Central Square to go see Heather Roger (author of Gone Tomorrow: The Hidden Life of Garbage (it's also a film, I believe) speak at the Center for New Words. She was nothing like I expected her to be, but it was a very good talk. She read bits from her book -- was I one of the only people there who had read it? -- and discussed them, then took questions from the audience. I actually had the nerve to ask one myself, and got her talking about biodegradable plastics and whatnot. She was really informed and it's nice to know there are others out there who are as concerned about trash in this world as I am.

One interesting thing she pointed out that I had forgotten from the book was that the "Don't Litter" campaign was started by corporations; it wasn't a grassroots movement of the people & for the people. Instead, the people were starting to get upset at all the trash that they were seeing in the world, and they began to want to pass laws restricting how many disposable products could be produced. The companies who made these things got scared, and they promoted a campaign that got people cleaning up after themselves -- and thus taking all the hard work off of the businesses' shoulders! Unbelievable. Rogers made a really good point, too, that these days it's so natural of an instinct in most people that if we see someone toss something out their car windows or drop a wrapper carelessly on the street, we have an automatically negative reaction to that person, and most have no problem confronting the litterer.

It gives me pause because on the one hand, I don't want to give those companies any more reason to produce disposables, but on the other hand, I don't really want to encourage someone to throw their garbage all over the place, nor do I want to do that. I guess it's one of those things that I can't do much about, single-handedly. If the entire nation was somehow moved to be angry at the disposables industry (which I so wish would happen), then I can see a mass trash-strewing movement making a difference, but I know that's just a pipe dream.

Rogers says things do have to start at the corporate level, though, not with the people. Even if we put all of our effort into recycling as individuals, that's not enough. Until companies start seeing profits that can be made from reusables or recyclables, it looks like we're stuck with tons & tons of trash. Ugh.

That, or they could be forced into stricter regulations by laws. But who's going to pass those laws?

Sigh. Oh, I get too passionate about this stuff. Thanks, Mom! :) xoxo

p.s. I believe a recording of the talk will be available on the internet soon; I'll be sure to post a link if I ever come across one.