Apparently my sock-gifting M.O. is to give only one sock out of a pair. I've done that every time I've gifted socks, and that's been 3 times. In fact, once I was giving 2 people each a pair of socks, but only had one pair completed, and thus gave one each one sock from the same pair. Yes, all quite befuddling, I realize.

In any case, one of these times occurred a few months back, on the eve of my sister Sarah's September birthday. I was taking a bus back to CT both for work & to help her celebrate! I had just settled into a good rhythm of watching The Baxter on my laptop and finishing up Sarah's second sock (I was just past turning the heel), when the bus hit a bump, and my 4th needle went flying. I calmly watched it arc through the air, somewhat detached from it all & feeling rather helpless to do anything. I figured I'd just wait until it settled, and then go & retreive it, rather than look like a crazed woman flailing around after it in the relatively small, enclosed space of the bus.

Well, it wasn't meant to be -- I continued to watch as the needle landed on the aisle floor...and then, hop! (said the French way), it kind of jumped & slid right through the grate running alongside...yes, the one the leads to the inner workings of the bus, I am sure, and not one that would be accessible to someone like me. Eep! I don't know how long it took for me to realize the gravity of the situation, but thankfully I didn't freak out on the bus. I calmly stowed the incomplete (and unable-to-be-completed) sock and pulled out the extra yarn (for yet another pair of socks) I had packed in a fit of ESP-esque inspiration earlier that morning. The rest of the ride went smoothly enough, with no more men down, but it was still rather upsetting. I had to, of course, present Sarah with only one sock on the night of her birthday. (Ironically, she later presented me with a bunch of needles she had purchased for me at a tag sale!)

I kept putting off finishing the second sock for so many reasons, but the other day I finally bit the bullet and picked it up again. The rest of the knitting flew by, and over Thanksgiving, I was able to present Sarah with the pair: 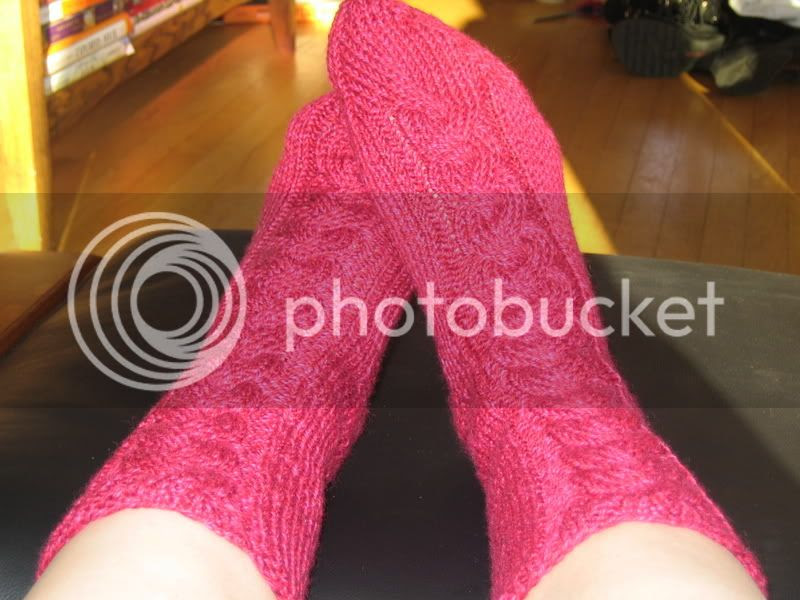 (That's me modeling them, but you get the idea.)

Luckily, I don't think the one-sock-giving affliction is going to continue to plague me much longer...but I can't reveal anymore.

For now, I've got non-knitting work to get done! xoxo