So, yesterday I dropped over $300 on three cavity fillings, all in one pop. I've never had a cavity before in my life. I guess that's what not going to the dentist for a couple of years (because I haven't had dental insurance since 2003) will do to ya. And apparently it's not over yet. Ugh.

Anyway, yesterday I also raced to finish knitting the scarf & hat set that I agreed to do for a soup kitchen in Providence - they are having their holiday party on the 10th, and I had agreed to knit some things to be included in a gift for an older woman. Here's how they turned out (hey, I had to try them on!): 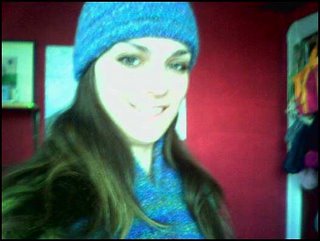 I hope she likes them all right! I tried to find a pretty-but-neutral color, and a nice pattern. I'm crossing my fingers it's a success, although I probably will never know...

Anyway, I still have a mad amount of catching up to do! So, let's see...where was I? I guess we can start with last Friday, when I had to get up at 5am in order to be showered and at the bus station in time to catch an early bus back to Hartford. Why would I do something crazy like this, especially when I had just been back to see my parents for Thanksgiving? Well, see, here's the thing: a couple of days before Thanksgiving, I had been to the dermatologist to get a certain patch of potentially malignant skin removed from my back. As I was on the table and they were sewing me up, the doctor informs me she'll see me again in 10-12 days. I say "you'll WHAT?!" NO ONE told me of this requirement. (No one told me of anything else, either, like that I couldn't shower for 48 hours post-op!) They know that I'm from out of town. The receptionist really could have informed me of this rather vital tidbit of information. (And don't even get me started on the reception there, which already has misscheduled and had to reschedule me once prior to this...) In any case, to make a long story short, I frantically called around Boston to try to find a place that could remove subcuticular (beneath the skin) stitches, and when all else failed, I rearranged my entire schedule/weekend plan so that I could come back for day #9 (unfortunately #10 and #11 were over the weekend, when the office is closed!!) for suture removal. Whew.

So, anyway. I took the bus home, was picked up by my ever-helpful father, and after a few stops (one being to my grandfather's nursing home, to pick up all of his belongings, which was terribly difficult), I made the appointment, the stitches were removed, and SteriStrips put in their place, with no further incident. But, I don't plan on seeing that doctor ever again. Which is unfortunate, because it's not her that's the problem, it's her damn reception area. (Who, by the way, are all terribly pleasant ladies - it's just that someone there doesn't know how to do their job!) Oh, well. Hopefully I won't have much need for dermatology in the future, in general....

Anyway, that done, I picked up my mom's car and drove down to Woodbury to spend the afternoon at the office. That went well, and I managed to make it back home and pick my mother up from work without incident; we met up with my father and all went out to Panera for a quick dinner.

Friday night, I got to go over Sarah's house and hang out, which was awesome. We always have such crazy, long, nonstop conversations, it's great. And I love hanging out with my friends & not having to spend a single dime, while still feeling like I have had a great time. Yay. <3 Anyway, we managed to get addicted to Soduku and then force ourselves to abandon it, haha. But mostly we just sat & talked & I had a blast. Wonderful, stimulating conversation. What could be better?

Saturday, I spent most of the day racing to finish reading Wicked so I wouldn't have to cart that big tome back home with me on the bus, and, despite a pleasant interlude when Sarah & Liam stopped by with some Chinese for lunch (yum, Green Tea!), I was successful! Hurrah!

Around 7:45, I had to pick Dan up from Union Station, and we drove around Hartford for a few minutes being lost (I know, how was that possible??) before managing to actually locate the Bushnell (good thing we all know it's right next to the huge capital building...heh) and park. We were going to see my friend Jen (and the rest of the Hartford Chorale + the Hartford Symphony Orchestra, hehe) perform Handel's Messiah, which was fantastic. I especially loved when they sang the Hallelujah chorus at the end, because that brought high school chorus memories crashing back...I was surprised to realize I remembered every single word of that song, and the timing! Neat.

Following the show, I got to see (and congratulate) Jen briefly & give her a couple of roses I had picked up, and then Dan & I drove back to Farmington, chatted briefly with my parents, and then got driven back into Hartford in order to make the 12:30am train. Yes, I know, incredibly complicated plans, but I am so glad it worked out. My parents are the best - I don't know what I would do without them! Always coming to my aid. :)

It was a good, if exhausting time in CT. I always like to be there, even when I am itching to be back in Boston, at the same time.

Sunday (I'll make this quick), I rushed around making cucumber finger sandwiches & packing them up, then stopping quickly at Bethany (my sister) & Sarah's open studio in JP to say hello before hopping back on the train to trek all the way to the other end of the city for a CodePink meeting, our first! Yay! It went really well - all the women in that group are wonderful, and I have a feeling I will learn a lot from them. I'm so energized & excited, now. I can't wait to see the group evolve & coalesce into a powerful voice.

After the meeting I rushed home to get ready to go out again, even though I wasn't feeling so hot, because we couldn't miss the Against Me! show in Revere! After quite the mix-up with the blue line being bustituted and dropping us back almost where we had started, Dan & I made it to the Wonderland Ballroom...and waited impatiently for AM! to come on. When they finally did, though, it was all worth it - they played several of their old songs, which I was definitely rocking out to (by jumping around in my chair like a 4-year-old, haha!). They did play some new stuff, but you could tell by the vibe in the room that their older songs were what was making the crowd excited. All in all, a good show. And, I got a t-shirt (a girly one! finally!), and managed to wrangle Dan a $13 (instead of $15) shirt, when we realized we only had $13 in cash, and there was no ATM in sight...score one for me for Best Girlfriend Ever! :)

That night after we got home, I ended up in bed with a terrible case of fever-shivers...and now, you've been completely caught up. So sorry for the delay!!! I'll try to be better next time....xoxoxo (extra kisses to make up for being slow)