i just thought this was pretty crazy 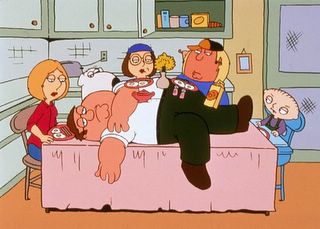 Apparently Lois started off with blonde hair in the original Family Guy plans (which would explain why Chris has blond hair, too, since Peter and Meg are both brunettes, and it appears that Stewie is also headed that direction). But I guess they got some kind of feedback & figured out she'd be better as a redhead. I agree - one can take her much more seriously as a mother with the darker hair. Don't ask me why I think that. But even Dan thinks she looks like a hussy in this picture. And we all know Lois is NOT a hussy.

Well, she DID have one and possibly two children who aren't Peter's, but...who's to say that wasn't before her marriage to our favorite Family Guy? Hehe.

Oh, and also? Turns out Seth MacFarlane's middle name is "Woodbury." Probably because he grew up in good ol' CT, and so it would seem that his parents named him after the town in which I used to live just last year...crazy. It appears that Woodbury seems to haunt me ... be it the one where I used to live, the one on Long Island near where my friends live, and I think there's even one up near Boston...crazy.
Posted by arianna at 3:43:00 PM