Wow -- I wrote this last Friday, but I never posted it. Sorry! xo

Never before have I depended so heavily on the kindness of strangers. My faith in humanity was largely restored last night.

Let me start from the beginning: after work, I raced over to Downtown Crossing so I could make a stop at Windsor Button and then Express (and I ran into Christine in between!). Bethany met me at Express and helped me so much; we efficiently picked out a great all-black outfit for me to wear to the new ICA preview party that Dan & I (as members) were to attend that evening. After stopping briefly to pick up some sushi at Ueno, I then raced home and got ready to go.

As a brief aside, you can see how happy I was earlier in the evening; this is from right before we left: 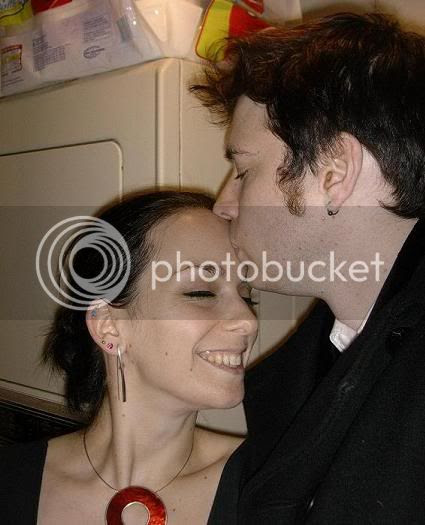 This was all set to change, within a matter of hours...the party itself was just fine; Dan & I enjoyed wandering around and looking at the art, seeing the people, and having a few complimentary drinks (not to mention some yummy desserts!). When we were ready to leave, we donned our coats and headed out to the street, which was largely deserted, as the waterfront is not quite yet the happening place that the city seems to want it to become.

We finally found a cab, and Dan & I decided to go to the RumBa at the Intercontinental for a few drinks to cap off the night. We arrived, entered the bar, and took of our coats, when Dan decided he wanted to eat at the 24/7 French restaurant in the hotel, instead. So we picked up our things, and were about to move into Miel...when I panicked, realizing that I couldn't find my bag!

And that was the start of an adventure & a half.

We spoke with the Intercontinental's concierge (who was very concerned but not able to do much, even after he got my hopes up) and Dan hailed us a cab back to the North End. I was so upset because our night was ruined -- but, more so, because that bag had contained not only my cell phone, not only my credit cards & ID, but also the only set of keys we had between the 2 of us! So, we were basically stranded. My sister, who lives down the block from me, has a set of keys...but she wasn't at home. Our landlord lives out in Ipswich. We could have probably managed to buzz ourselves in to the building...but, then what? We'd be stuck outside of our own door.

Me being who I am, I was capitulating ahead to having to call the next day to cancel all of my credit cards, convinced Dan was going to leave me because I was so stupid, and was already trying to figure out where I could afford an apartment by myself (well, not really, but I was close to that point), when my genius boyfriend thought to call my cell phone. Well...duh! Of course! At least it was a start.

We got quarters for a pay phone, and of course the first one we tried didn't even work. (I will never take for granted the existence of a pay phone, ever again! You never know when you won't have your cell phone on you....) The next phone connected, and I waited, holding my breath, as we heard the phone ring...and then someone picked up! Asking if it was Arianna! Apparently this angel had found my bag in the back of the cab and had taken it with him for safekeeping (okay, so I know that maybe I'm giving him the benefit of the doubt here, and he could have just wanted to see what he could get from it, but at this point I feel so much relieved love towards him that I'll give him that benefit), and had called my parents' house (it is listed as "Home - CT" in my phone, so it makes sense) to tell them he had found my bag. The guy was about to go to bed, and he lived all the way out in Brookline, but we begged him to stay up & wait for us to take a cab out there (I don't know what I would have done without Dan, who was able to finance all the cab rides for me -- for which I fully intend to pay back).

The cab we got into was also fantastic -- the driver let us use his cell phone to get in touch with the person who had my bag, so we wouldn't have to go out searching for a cell phone. Dan had offered a $100 reward to the guy for our bag; he ended up only taking $40 of our money for the trouble of staying up. I so wanted to hug him, I was that relieved to have my bag back!

What a night. I'm still exhausted from it! When I was finally back in my lovely, lovely bed, I simply lay awake for a bit, staring up at the ceiling, being grateful for every moment that I was able to lie in my own bed, with a roof over my head. I too often take that for granted, and I guess that's the lesson I learned last night!

Ugh, unfortunately, the Week From Hell didn't end up looking any brighter until a few days afterwards (and even then, I still at times feel like a total mess, screwing things up left & right!). But at least we are healthy & happy & safe, and that is all that really matters to me, in the long run. Even as I was crying over having lost my bag, I knew I wasn't nearly as bad off as I could have been. Granted, you probably couldn't have told that from the way I was freaking out...heh!

I am so excited to hear about all the wonderful and amazing things that are going to happen to you when your luck changes. :)

And go Dan for being so understanding - sounds like a great guy (anyone who could deal with *ME* in that situation would be a keeper).