Last night, Dan came home and went straight to bed...I guess he's been really tired, but I was kind of worried about him, and he didn't get up all night. So when I went to get ready for bed myself, I watched him more closely than I normally would...and I couldn't see him breathing. His breathing was just shallow, of course, as he was deeply asleep -- but I became terrified that he wasn't okay. I changed quickly into my pajamas; usually even very small noises will disturb him and agitate him in his sleep, but no reaction. I was becoming more and more frightened, but I didn't want to deliberately try to rouse him if he was just sleeping. What kept flashing through my head, though, wasn't oh my god, what should i do? but rather oh my god, what would i do if something happened to him?! As I tried to watch for breathing and as my terror increased, I felt like my heart was breaking - like I would lose half of me if Danny suddenly wasn't there anymore. It wouldn't be right, me without him.

Fortunately, I didn't yet have to actually face that scenario: I climbed into bed and still Dan didn't move a muscle, so I allowed myself to touch his shoulder. To my immense relief, he half-turned toward me, and I felt like collapsing from the release of tension. He barely noticed the disturbance, but I breathed deeply and cried quiet tears of relief to myself. I wanted to wrap my arms around his breathing torso - my proof, by touch - and fall asleep the way he holds me so often. Protective. I was feeling protective of him.

But I didn't want to disturb him again, so I just lay with a finger here, an ankle there, something always in contact with his heartbeat. I needed that small assurance. I eventually fell asleep listening to our pulses converse through my fingertips.

Okay, so I "beautified" this encounter a bit, to make it more story-like - but it really did happen like that last night. I just prettied it up. And yes, I know - I tend to work myself up over nothing. I have got a lot to work on in that area.

In other news, it's been doing this all day: 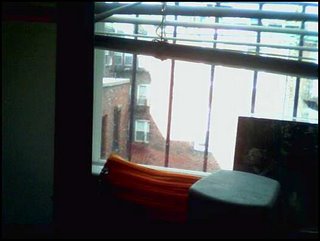 Which, if you can't tell from the terrible photo, is both sun (right side of the picture) and snow (you can see some flakes in front of the brick on the left). God can't seem to decide what he wants the weather to be. I took that sitting at my desk - that's the view out my window.

I need to get back to work. xoxo

hey ari.. wow.. i really miss reading your *blogger* blog. :) i like the format so much better, but i also like the fact that i have all of these friends in one neat little package, when i use livejournal. :)

luv ya, can't wait to see ya tomorrow!!