Last night Sally, Dan, Bethany, Kevin, Sarah C, and I all went to Seamless, a fashion show put on by the Museum of Science's "where science meets art" series. It was very neat - most of the clothes & concepts were fantastic, and it was so impressive how much it felt like we were at a "real" fashion show! Very professionally done. Dan wrote up a good review (incl. photos) here, so check it out if you are interested in further information.

The funniest thing from last night was when Dan & I were walking home; Sally wanted some company to get safely to the T, so we hung out on the concrete island amidst all the traffic near the Science Park stop, waiting for her. While we were standing there, I noticed something rather odd about the stoplight across the street from us...it was facing the concrete bridge it stood next to, and thus reflecting off of it, like so: 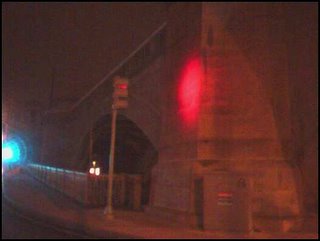 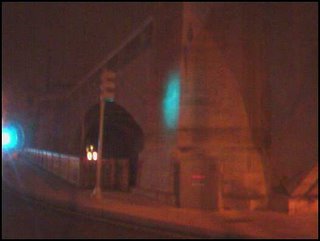 At first, I was thinking the photos might not do the weirdness justice, but then I realized it's a traffic light reflecting off something, which isn't really normal. And probably not the most effective. I wonder how it got that way...Dan tried to turn it back, to no avail. Oh, well - at least people can (hopefully) tell by the reflection when they're supposed to stop & go!

Have a lovely day, xoxo.