I realized I hadn't written in a while, although there's really not all that much to say...oh wait, YES there is!! Lemme start way back on Saturday...Dan and I got a kind of late start driving up to Boston, but when we got there we had no trouble parking at Riverside (well, besides that I was breaking the rules & wanted to park for 2 overnights & one day, since I was going to be staying until Monday evening) and hopping on the D line, inbound. We got off the train at Park Street so we could stop at Downtown Crossing to do a quick bit of shopping (Dan was cold & wanted a shirt; I needed to buy some nail polish remover in anticipation of my surgery; I had forgotten to remove my nail- and toe-polish earlier in the week like I had intended). In any case, we arrived at Bethany's apartment and didn't do much beyond eat and hang out, but that was just fine with us because we were exhausted and starving.

The next day, Bethany had an awesome little birthday brunch for me, with several of the awesome people she knows that live in the city. Ashu, Kevin, Claudia, Veronica, and Sarah showed up, yay! We made fruit salad and French toast (out of baguettes, which is the best) and ate cannolis and an awesome ricotta-blueberry cheesecake Bethany had baked for me. Yum! At around 1 Dan and I had a pretty last-minute appointment to meet up with a North End realtor, who had a few places to show us. I hadn't been expecting to do much actual looking at places that weekend, since most apartments hadn't even completed all of their rent-renewals yet, and I had been told several times to call back in June or even July! But we met up with Steven, who showed us 3 really great places, and by our walk back to Bethany's, Dan and I had pretty much decided on the second one we had seen! Whew - fastest apartment-buying I've EVER done - we called Steven back, he agreed to meet us again to show us and Bethany the place, and we hung out for a bit while we filled out the applications and chatted about the North End. Yay! The place rocks, and thankfully Dan's bad credit didn't even have to factor in - they just looked at mine.

So, I will try to keep this short, but I can't stop raving about the place - we are on the top (I believe it's the 5th) floor, which is actually awesome because the 2 apartments on the top floor each have their own *private roof deck*! Meaning, there's the roof, and we each have half. The decks are both actual decks, outfitted with wood planks and everything, and there is actually a working sink up there, which runs throughout the summer months! That was one of the first selling points, but wait, it gets better: we also have a pretty large kitchen with a built-in kitchen table, lots of storage, a skylight, TWO sinks, TWO ranges, and a grill! The bathroom, unfortunately, has no bathtub (something I had wanted, but I'll get over) but does have another skylight (this one clouded glass) and holds our own washer & dryer units! It's small, but functional. Then there is the living room & 2 bedrooms off of it, which aren't huge but are also functional. We'll use one as the bedroom and the other as our office/guest room, when needed. The apartment actually reminds everyone of a log cabin; it's got a lot of kind of dark wood, exposed brick, and wood floors. Anyway, we love it! I can't wait to move in on September 1...! For now, though, we have to start scraping money together to pay the fees and such...

So that was good news, because on Monday morning while we were all eating lunch (well, everyone else was; I wasn't allowed to eat anything after midnight on Sunday because of anethesia worries), I got a call from Steven telling us we had the place! Sweet - now we just have to sign a few forms, mail in a few checks, and wait until September! :) (I'll have to crash at my parents' for a month, but it's definitely worth it.) Anyway, then Monday I had the operation to remove the 5 (!) screws from my hip, post periacetabular-osteotomy. Everything was successful, and even recovery went smoothly! I was sent home pretty quickly, and Mom and Dad got me settled in bed and with my drugs for the night. Not bad. :) 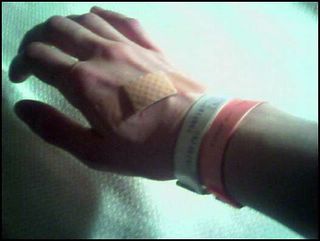 The rest of this week has mostly been a combination of Druggy Arianna (Dilauded!) trying to do some work, napping a whole lot, reading a whole lot, and having awesome friends like Marsha & Jen stop by (and Tanya would have, but I passed out before she called! sorry!). I have watched more TV in the past few days than I have all year, which isn't actually saying much - maybe 5 hours in all, tops. But thankfully it doesn't make me want to go back to it anytime soon...

Well, that's pretty much caught everything up...I feel like I had more to say, but right now I can't think of it. For now, I'm gonna go try to get some more work done. I'll add more later if I'm up to it.