When I was 16 years old, I developed the second of the only 2 celebrity crushes I've ever really harbored. (The first was directed towards River Phoenix, when I first saw Stand By Me at the age of 8.) My sisters took me to see a sneak preview of Good Will Hunting, and one of the actors in the movie caught my eye. No, it wasn't Matt Damon or Ben Affleck, although I have to admit they are both handsome & charismatic men. Instead, I had eyes only for Casey Affleck. Ever since then (with the good help of friends & family who are well aware of my harmless little "crush"), I have followed Mr. Affleck's career; I think I have seen almost every movie he's been in since. I find him to be not only very attractive, but also a fantastic actor.

Yesterday, my sister called me up & told me that both of the Afflecks were nearby at the wharf, filming footage for Ben Affleck's upcoming directorial debut (at least for a full-length feature), Gone, Baby, Gone. Feeling like a silly, nervous teenager, I grabbed Dan's camera and met her & Karla near their workplace, and we casually "took a stroll" past the set. We managed to catch a glimpse of both of the Affleck brothers, although they were unfortunately surrounded by cast & crew. I tried to snap some pictures (we were only about 15 feet away!), but none of them turned out all that well; the set was constantly in motion. 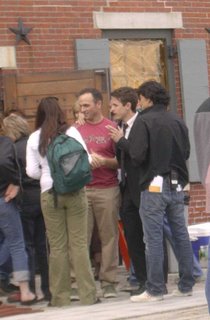 But, I still was thrilled to get to see one of my favorite actors! I couldn't bring myself to walk up to him & say something -- I'm not that kind of person -- but it was still a neat experience. I will probably always kick myself for not taking probably the only opportunity I'll ever have to meet the man, but I find it strange enough to be calling famous people by their first names -- as if we know them personally! I would never be the one to ask for an autograph or a picture. It just isn't my scene. Oh, well.

In any case, he's just as great in person as he is on-screen. Boy, do I adore those scrappy little Irish boys (and yes, Danny, that means you!)...

p.s. It appears that Ben Affleck saw us, and looked none too pleased...? 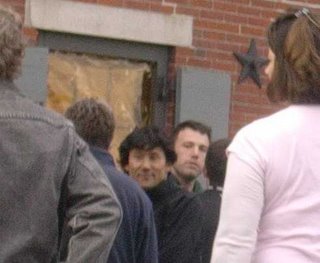 Hi Arianna - Bee referred me specifically to this blog I had lunch with her & she said that you guys saw celebrities in person. You both must've been so excited. Next time you'll have to try to snap a picture of the Mrs. Affleck as well! Then you could sell it to the Celebrity Magazines and make some MULA for your knitting supplies! - Nicole Chang