I haven't caught up in a while, but then again, there hasn't been much to catch up on. Life is all right, you know how it goes....

One big piece of news is that Marsha comes home today, after a year abroad in Japan! I hope she has a wonderful time being back stateside!!

The weekend was pretty quiet, which was good, as I wasn't feeling 100% healthy. Friday I got lots of rest, and Saturday Dan & I wandered around Downtown Crossing & Newbury Street (mostly on errands for him) in the beautiful weather, until our reserved ticket time for The Da Vinci Code at the theater on the Common. The movie was all right, although I suppose I would have enjoyed it better had I not read the book, as I spent the entire time knowing the "plot twist" and thus regarding the whole story differently. I'd guess that was a problem most of the audience had, as it was such a widely-read book. I also had been very surprised when I learned that Tom Hanks was to play Robert Langdon, but I've now had months (years?) to get used to the idea, so he didn't seem out of place. I think he & Audrey Tatou (oh, j'adore la petite Amelie!) played their roles well (as did several other characters). I will never list it among my top movies, but it was entertaining, at the very least. I didn't feel like I had wasted 2 hours of my life...but I also didn't necessarily feel like they were terribly well-spent, either. Oh, well. Ca va. (If you couldn't tell, the movie at least made me yearn to return to Paris again soon! haha)

Sunday, I had a CodePink meeting at Sue's; it was a small group this month, but very pleasant. Sally & I managed to (unintentionally) linger just long enough so that the rain was just beginning as we left the building...clutching my small umbrella between the 2 of us, we raced over to the train, and got ourselves soaked in the process. Sally was using my cell phone to make a call, and as she raced to catch her train before it left, she passed the phone back to me...I didn't managed to catch it, and I watched in horror as my phone went smashing to the concrete, and broke apart! I scrambled to pick it up, and saw to my immense relief that it wasn't that the clamshell phone had split asunder as I had feared, but rather, the battery had popped right off the back. Phew!, I thought, that could have been bad. I figured I'd just get under the inadequate shelter at the train stop and everything would be fine.

...Turns out, everything was not fine. As I stood, waiting & waiting for a train to come my way, several other people arrived at the stop, and one woman informed me that the green line wasn't running past Kenmore: we'd have to get connecting buses. Sigh. But I figured hey, that's doable, I'm in no rush. So we waited some more, listening to the thunder & watching the lightning...and then another woman came up to us to let us know that not even buses were running, for some reason! By that point, we were all soaked to the bone, and becoming fast friends...well, good enough friends that the young couple to my right asked me if I wanted to share a cab with them. At first I declined, thinking I had no cash on me, but then I realized I could scrape together several dollars, and I agreed. We caught a taxi into Copley (the couple & the cab driver were very pleasant company!), and then parted ways. I slogged through the rain down Dartmouth Street until I got to Back Bay, where I huddled in cold, wet agony (I was wearing flip flops, and my jeans were soaked up past my knees) for the next orange line train.

I was in a miserable mood, and understandably so, when I climbed above ground at Haymarket...but as I turned the corner of the station, I saw a simply beautiful double rainbow (you can only really see one in the photo) arcing right into the North End, and I managed to grin, despite myself. 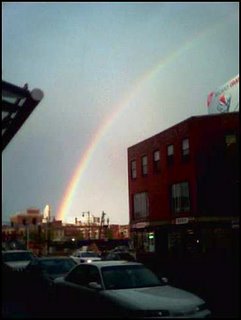 I won't lie & say I was in a great mood after that (Dan can attest to my crankiness upon arriving home and peeling off my wet clothes), but it did definitely brighten the day up for me, however briefly. I guess it was a good reminder that sometimes we do have to stop & make time to appreciate the little things. xoxo