that could have been bad, but wasn't

Nooo it just started to snow again! Spring, what happened to you?!?

Well, I just got back from the Women's Lunch Place, which was, for the most part, a lot of fun, as usual. I really like the people who work there - but today they proved to be even better. Right at the end of my shift, as I was finishing up preparing the hot dogs, a guest whose eye makeup helped her look uncannily like Liza Minelli (now, not then) came in for a glass of water. Apparently there wasn't any out in the dining room like there should have been, and she was irate from the start, saying she had to take a pill and needed water. I politely asked her for the cup she was holding, but she clutched it and barked at me to "let the water run cold, first!"...so, I did, and went back to my job of scoring hot dogs while I waited. The next thing I know, she's yelling at me about how I'm ignoring her and won't get her water! Thankfully, Gina (the director when I go in on Wednesday mornings, and a very awesome woman) appeared right then and started clearing the situation, explaining that I hadn't been rude (which is what "Liza" claimed) and asking her to please treat the volunteers with respect. "Liza" retorted that I wasn't respecting her, which was absolutely absurd, as I was doing nothing but catering to her requests, but sigh. Such is life. I was a little shaken up but fine until I went in back to get my coat from the closet, and people started asking me if I was okay -- and when people ask, I just can't hold it together anymore! So I cried a little bit, and got fantastic hugs & sympathy from everyone, as I expressed my wishes that I could be less sensitive -- they assured me that they are all sensitive when it comes to people at the WLP speaking rudely to them, and everyone was so incredibly nice. I couldn't believe how kind they were to me, and how many hugs and motherly reassurances (not to mention tissues) I got! What a great group of women. One of the regular girls said she wanted to make sure I was okay and that I wouldn't stop coming back, but especially after that show of support, of course I will keep going! I really like those Wednesday mornings, as I get more & more comfortable there.

And, it turns out that the rude woman had just gotten back from a bar (yes, at 9am), which explains some of her callousness. But, that's what we're there for -- to help someone who needs it. I am okay. I just hope she will be.

To backtrack a bit, Dan & I attended a Habitat for Humanity training session in the Fort Point area last night, and now that that's behind us, we can volunteer anytime, yay! I don't get a chance do H4H much, but it's cool to know that we can now sign up every once in a while to help out. I am looking forward to that - I love learning how to build pieces of a house. It makes me miss the days when I used to work in my father's workshop with him, making wooden boxes and other (usually entirely useless) creations.

And here is a picture of the baby hat I've been working on recently, just because I don't have any other pictures for this post: 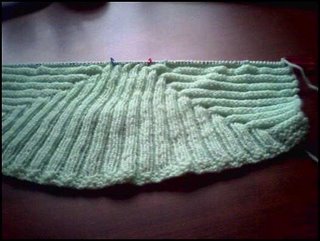 Aaahhhh the flakes of snow are getting bigger! STOP IT!! xoxo