I can't believe I forgot to mention my favorite part of last Sunday: Fuck! ...Dan & I went to see that movie (preceded by Zombie-American) at the Coolidge Corner theater. They were being shown as part of the Boston IFF, and I really enjoyed both! They each covered very interesting topics rather amusingly. The one thing that stood out was poor editing -- you know that's something that would strike me: in a part when Janet Jackson's infamous wardrobe malfunction was being discussed, they said that she "beared her breast" or something along those lines. Eep! I don't really want the seriously ouch mental image I'm having of a grizzly clawing her naked breast. I hate to see something that's so professionally wrought have such a glaring error. The film itself was great, otherwise. I just can't take anything entirely seriously if it's presented as a finished product and has poor grammar! I'll be the first to admit I make my mistakes, but were I submitting a paper or filming a movie, I'd be sure to have someone double-check my editing (and I'm sure I'd be quadruple-checking it, myself!).

In any case, I'm glad we got to see part of the IFF -- next year, I hope to hear about it earlier. What I'd like is to see more of a breakdown of the films being shown -- the website is great, but I would never have sorted through all of those movies listed! Instead, I kind of found the ones we went to see inadvertently, by first noticing Zombie-American on the Brattle site, and then finding out that it was playing with another film I was quite interested in seeing!

Yesterday after work, I rushed to complete my errands in Downtown Crossing, stopping first at the pen shop (I love that store!), then running to get to Windsor Button before it closed. As usual, I wandered around in pure bliss for a few minutes (particularly near the yarn section) before settling down to business. I purchased 9 small containers (blue, green, and white) of fabric paint for the banner CodePink'll be making tonight for Sunday's march, as well as several yards of ribbon (purple, blue, green) to use as streamers. Fun! (I also managed to resist the burning temptation to purchase some Noro Kureyon (yarn); I have made the resolution to come back once I've finished a few more things using my stash. For now, I don't really have the money.) And as for the real reason I went there: the store doesn't carry safety eyes, but I did pick up some buttons with shanks on the back that I'll use instead.

But, only when I make other toys, for older children. I went through all that waiting, just to realize that I probably shouldn't put swallowable eyes onto a doll that a very small child might carry around. So I decided to embroider not only the mouth, but also the eyes. I've never embroidered anything before, but I figured "Ah, I'll just wing it, how hard can it be? I'm just stitching a face on."

And, I learned a very important thing yesterday... 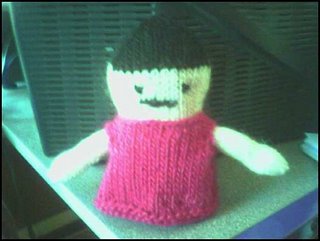 ...that I have no idea how to embroider. None whatsoever. I think I'll take to calling her Lucy Lopsided, because of her sad little uneven face! (And yes, she will have legs - she just doesn't, yet.) Oh, well. I guess I'll learn a little more each time I knit one of these dolls. --Anyone out there know how to embroider, and feel like teaching a poor knitter?

I just hope the doll won't scare the baby too much...