I think Dan may just kill me if I paste one more Gizmodo link into our IM conversations (I heart that site...so many sexy products!), so I thought I'd put one up here, since I think it'd be underappreciated by him, anyway: 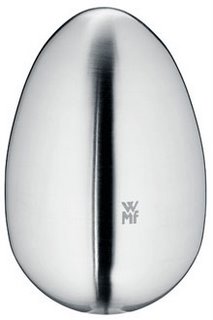 I must try this out.

As sketchy as it looks, it's actually an egg-shaped (no idea why) odor-eater for ridding oneself of those terribly annoying (and really persistent!) smells that linger on your fingertips after chopping things like onions & garlic. And $12 ain't that bad, considering how I generally avoid cutting onions at all at this point, because I hate those fingertip odors so.

I'm also really interested in trying this out. I've added it to my wish list on Amazon - which, to warn you if you click on it to see what I'm interested in, is very limited at the moment (in terms of things I'm reminding myself to check out -- which is mostly what I use it for). I once deleted most of what I had put on there because I was irrationally worried that Amazon's servers and backup machines would somehow all crash, and I would lose all the books I wanted to remember to read, so I copied them all down manually. I know, I'm rather odd sometimes. I think that whole fear-of-a-computer-failure thing is pretty logical for someone who works so intimately with computers & code, though. I know all too well the things that can and probably will go wrong, considering the shortcuts some programmers are known to take... (Not moi, of course!)

/me smiles & bats her eyelashes innocently

Umm... My first impression of that gizmo wasn't that it was for cleaning fingers. I thought maybe you were posting vagina art. I'm just saying.

heh yeah...i figured using the word "sketchy" indicated i saw the way that looked, too, but i guess not! oops. :)

You can clean those odors from your fingertips by rubbing them on a stainless steele sick, which probably works for the same reason the egg works. Try it out...and, since you already own it, it is free.