well, that wasn't so bad

So the taxman (well, woman) turned out to be not so bad...I trekked all the way over to the office only to spend about 10 minutes talking with the woman, who basically told me (after much deliberation) that I could file in CT, as everything of importance for me (voting & car registrations) were based in CT last year. I was about to have her continue on & help me fill out the forms, until I learned that she charged something like $125! So, I just decided to head home & do them on my own.

Unfortunately, that didn't turn out so well, either, but I'm halfway done, and intend to be done with them entirely in the next few days. I am (mostly) digging TurboTax online, though - for something so complicated & confusing, they really do make it almost bearable.

Yesterday I also finally managed to get through to the MA Public Health Commission...last Thursday I received a letter from them, asking me to call them because I had been diagnosed (remember that bacteria that knocked me out for a week, after Japan?) with Campylobacteriosis (I so just guessed on the spelling of that, and I was totally right! nice), which I guess is a very common digestive tract infection. They just mostly wanted to talk to me about what I did (if I worked in food service, daycare, or nursing) and whether there was any chance I had spread it around. Basically, they want to cut an outbreak off at the pass - or at least be aware of its origins if it does actually get far. The woman I spoke with was very pleasant though, and we chatted for quite a while as I gave her all the information about the hotels we stayed in & flights we took (I was surprised at how much I remembered off the top of my head!). 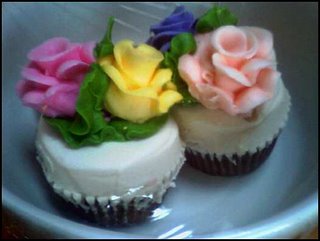 Yesterday night, Kelley came over & we all had a lovely dinner, complete with a fabulous ice wine Kelley picked out, and followed by a large selection of desserts (we had both picked some up!) - including the humungous (& delicious!) cupcakes pictured above. Seriously, they had sooo much frosting - and I am normally a frosting whore. The fact that I couldn't even finish my cupcake was rather disturbing to me...but, yum! :)

Okay, back to work for now! xoxo