i know i deserve a slap on the wrist

Well, okay, so I haven't been great about updating here recently, I know...I've been busy, what can I say. And tired. I know, the oldest excuses in the book...anyway, not much has happened recently, which is another excuse of mine. :)

On Wednesday morning the UPS guy showed up with a package for me, which I wasn't expecting, since my credit card STILL has not been charged for the order, ugh! They were the metal lockboxes that I had ordered to store all of my paperwork in - I'm a pretty organized person, but still I figured that a fireproof box would probably be better than the file folders I'm currently storing everything in. So. Spent some of Wednesday night organizing all that stuff, although I'm still not done. Didn't get to start organizing, though, until after Dan and I went to see Sahara, which I wasn't expecting much out of, but I thought it was a good movie! Fun, exciting, interesting. I've seen lots of negative reviews of it, but really I enjoyed it. Since it's a Clive Cussler series, I'm sure there'll be more of them in the future, and I have to say I wouldn't mind. 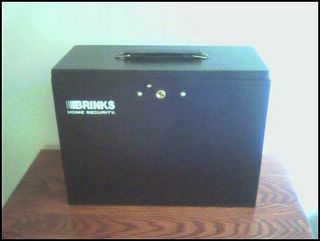 After the movie I picked up some cool red hanging file folders at Target, and then we headed home so I could start making labels & stuff...I know I have some sort of OCD, I've talked to people about this before, hahaha!

But, wow, I'm getting ahead of myself - I wanted to write about what happened before the fileboxes even arrived, because I thought this was hilarious: I was checking Desktop Weather as usual to see what it was like outside, and I was kinda shocked to see that it was 113 degrees outside!! Haha - then it climbed up to 116 degrees 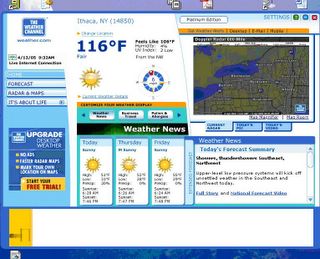 and then, finally, around 10am the thing was fixed. 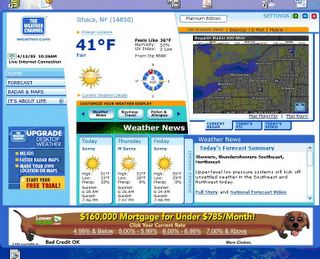 Must've been a malfunction in the temperature gauge, but HAH! I was having a ball. I even thought maybe it was a programming bug at first, but I checked other places & they all seemed normal. So it must've just been that someone was tampering with the thermometer that the Weather Channel uses, or else there was something seriously wrong. Either way, don't worry, it wasn't nearly that warm outside...! :)

Dan & I also ran some errands that afternoon, and while we were walking to the bank I noticed the first buds on the trees! YAY! I know they're probably been out from a while, but it always makes me happy the first time I take note of them - you know spring's really arrived by then. They were great fuzzy, grey buds, too - perfect for the first ones. Hmm I have yet to see a robin, though...maybe Ithaca doesn't have 'em. They are Connecticut's state bird, after all. Maybe they don't like to travel. :)

We also stopped at the library, which made me VERY happy because I finally cleared up that lost DVD problem!! WOOT! That made my day, too. I am so glad that I can finally enjoy going to the library once again... <3

In other news, we started the poetry unit in my creative writing class...UGH. I am not a fan. I mean, certainly, there is poetry out there that I truly appreciate, but I tend to shy away from the genre, in general. Doesn't do much for me; I prefer prose any day! But what I'm most dreading is having to read my classmates' poetry. Now, they are all good writers; they've proven themselves to be so from our short story unit. However, one of the worst things in the world to me is having to sit through reading everyone's hack poetry, gah. Not to say mine's going to be any better! I am just NOT a poet. But I don't want to have to force my shitty poetry on them any more then I want to read theirs... Well, at least I'm sure there will be a few people who are pretty good at writing poems, so maybe I can comfort myself with that.

I am gonna get back to work for now, but I will try to add more later. Part to make up for my laxness this week, and part because I have some more things to talk about, but a break is needed. Ciao for now.

TITLE: This Is Burning Man: The Rise of a New American Underground

OK, OK, so sometimes we goof!

If you email us your address, we'll send you something from The Weather Channel.