You wanna know one thing I really hate? When movie posters (or sites; I found this one for you to see what I'm talking about) show pictures of, say, three of the stars from the movie...and list the names above in the complete wrong order! Well, wrong in my eyes - I'm sure it's order of importance or something, but then why don't they photograph the people in that order?? It makes no sense to me. I am not all that up-to-date on who actors are, so when I see a movie poster sometimes it'd help to be able to see who is who, but associating a name with the photo underneath it. But, no. Movie posters want to be annoying, it seems.

Heh. Anyway, yesterday was a frustrating day because around 5pm I got a phone call from a COLLECTION AGENCY!! Regarding a bill that I was told by my insurance A MONTH AGO would be covered "within a week or two" (yeah, I have taken to writing down exactly what everyone says to me, after the Big Referral Mess of 2004...) Now, as far as I know, I have pretty good credit - I pay all of my credit card bills off on time & in full, and the same with my car loan payments. So this is really going to bother me if I get shafted credit-wise because my insurance is taking a long time to pay a $170 bill! Now, I could afford to just pay it myself, but it's partly the principle of the thing, and partly that I shouldn't HAVE to pay that $170, which I really can't spare. So, I am going to have to start pestering my insurnace carriers for the next couple of weeks, because - funny thing - when I called last night to see what the deal was, they told me that the claim had had to go through an approval process, and that it would be paid in - what was that? - "one or two weeks". UGH! At least, like I said, I have started taking names. I'm on the warpath. As grateful as I am that my insurance covered something like $60,000 for my hip surgery and associated hospital visits (and really, I AM grateful that they did that!), this is still such a pain in my ass. I can't wait until it's over, ugh.

To let off some angry steam yesterday - and because we've been planning to do this for a while, now - Dan and I made meatloaf for dinner. We don't cook together very often, although Dan usually keeps me company in the kitchen while I prepare something out of a box, heh. But we have decided we should do that more often - it's a lot of fun! And it turned out to be a pretty good recipe, even despite the fact that we didn't have any of the correct pans for cooking. But everything turned out okay. And we watched another hour of Cleopatra while we ate dinner, heh. It seems to be a movie that needs to be watched in installments...especially since it's 4 hours long! 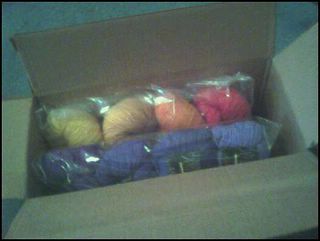 My Cascade 220 yarn (in yellows and purples) arrived in the mail today, whee! I can't wait to start knitting those felted bags for my sisters.

Last night I also wrote a card, in what's left of my French, to my middle-school French teacher who is sick with cancer. It's so sad to hear that...I hate growing up, because that means everyone you know & love ages. =\ But I hope she will at least appreciate the sentiment. I wrote to her that she was my favorite French teacher and that her passion kept me studying French, which in turn allowed me to meet and speak with my great-uncle who lives outside of Nancy, where my grandmother grew up. And who doesn't speak a word of English. That was a very important thing for me, and I wanted her to know how much I appreciated her help in all of that. ...I just hope she can understand what I was trying to say! The longer I go without speaking French the less & less fluent I become...well, at least this weekend I have a French Language Meetup that I think I'm going to attend, to try to choke out a few passable phrases in conversation! Ack.

Okay, gotta get back to work for now. <3