Well, I am supposed to be posting about our trip down to DC for the anti-war protest this past Saturday, but I keep putting it off because I really don't know how much I have to say about it...it wasn't one of the better protests I've been to, although it was neat because there were tons of people, everywhere! The bus trip itself down to Washington was really long; the buses left Roxbury Community college around 10:30pm on Friday night, and we arrived in the nation's capital around 7 the following morning! Cramped & exhausted, we climbed out of the bus and were pointed in the direction of the gathering-places. Dan and I wandered off while they were still grouping people together, because Dan kind of had his own agenda in mind. We happened first across Cindy Sheehan's Camp Casey setup, where early that morning people had set up thousands of crosses and empty boots to represent the soldiers already slain in the Iraq war. We kept walking, past the Washington Monument (that thing always creeps me out; not only because it's such a Masonic symbol, but also because the two blinking red "eyes" at the top make the whole thing seem like a huge flatworm, I think) and into the ANSWER gathering, where a huge stage and many booths had been set up - I hadn't realized it was so big of a thing, and so planned! I guess I hadn't known what to expect; other than buying the tickets to go down there, I hadn't had much of a chance to read up on what was being planned for the weekend's events.

We wandered through the maze of people and posterboard and pamphlets a few times, trying to find the anarchist group that was rumored to be gathering "under a black flag". Dan did a bit of research on his phone and found out that they were actually camped out pretty far from the main action, all the way in Dupont Circle! Along with the World Bank/IMF protesters, perhaps because that seems to be their usual gathering place. So, after being rerouted again & again (we ended up having to backtrack all the way to Cindy Sheehan's camp in order to get on a road that wasn't barricaded off), we found our way and hiked up to Dupont Circle, where a small group was already gathered. Not much was happening there, so we hung around for a bit, and watched more & more groups of people arrive until it looked to me just like the A16/WB/IMF protests back in April (yay, Sarah)! The crowd was thickening, and consequently also the police force, so when we saw the convoy of cops headed towards the park, we decided we'd make a quiet exit and go check out the action back at the main grounds.

When we got to Pennsylvania Avenue (in front of the White House), the crowds were thickening, and we found ourselves walking in the same direction as lots of other protestors as we headed back to 15th St. But when we got there, chaos! There were people walking down the street in both directions, as if the march had already started or people thought it had, we weren't sure what! Eventually we found a large enough group walking in the correct direction for the march and fell into step with them. But things were still a disorganized mess - it felt like we walked maybe two blocks all together before we were back where we started from, and everyone had gathered in a big crowd in the middle of a street crossroads. Dan and I went to see what was going on up the street a ways, because it appeared that a large part of the march was still going on (with most people around us oblivious to that), but when we got close enough, we saw that the police weren't letting people down where we were off of the parade path!! So we decided to turn around before they shuffled us into the crowd, too - we figured they were trying to keep us all divided & thus under control, and we were having none of that.

We managed to find another route to join up with those still marching, though, and Dan located the anarchists, so we kinda joined up with them for a while. From there (I think this is where I really started getting tired), the day is pretty much a blur of marching and stopping to sit on the curb and anarchists holding a vote to decide which way to go and eating hot dogs and egg rolls from street vendors and meeting a woman named Nancy who we stuck with for a quite a while - she was a vetern of the Vietnam protests, and a very interesting woman to talk with.

At some point, everyone started gathering back at the ANSWER space for the start of the concert and speeches and etc., and a short time later, Dan & I had to head back to our bus. So we found a metro stop, waited in line there for a good 15 minutes, and managed to make our trains & connections with just about perfect timing! We wandered around a parking lot full of buses looking for ours for a while until Dan located it in the back of the lot, and we stumbled aboard, exhausted & very happy to be able to sit (although we certainly weren't looking forward to another 8 hours trying to sleep in cramped, upright positions!). The bus got us home at about 3:30 in the morning, we grabbed a cab back to the North End, showered, and collapsed into bed. Whew, what a long 28 hours!! I'm glad I got to go & participate in the march, but I don't feel like it was all that effective, despite the estimated 300,000 people who showed up to make their voices heard. Hell, Bush wasn't even in town! Oh, well. One of the great things about the entire day was just seeing so many like-minded people who I could connect with on a mutual anti-war stance, at the very least.

Perhaps I'll have more to say about the march & how I felt about it as I mull it over a bit more, but for now, that's my story.

Sunday, we went to see my sister's Open Studio in JP, which was really great - her and her studio-mate's work is fantastic, and apprently they got a lot of compliments & did really well! I managed to wrangle a Christmas present of one of Sarah's prints out of Bethany (although I'll have to wait to get it until December, sad!), and I bought a t-shirt 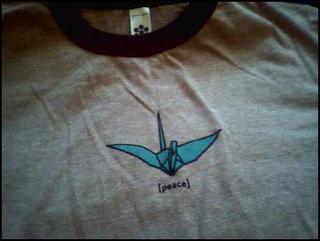 and an elephant print 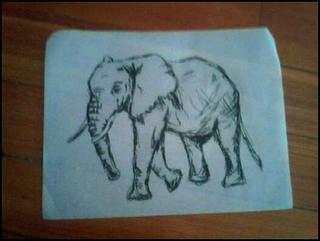 from my sister. She's such a wonderful artist & designer. I really hope she finds a job she can really enjoy, soon. I know she's feeling stifled at her current one.

Well, speaking of jobs, I have to get going; work calls! xoxo

p.s. I bought the new Family Guy DVD at Newbury Comics yesterday. I can't wait to watch it!