Last night, irony of all ironies, Dan & I went to see Dr. William F. Pepper - James Earl Ray's lawyer, and author of two books on MLK, Jr. - speak at Brookline High School. He spoke for 2 hours about whodunit, mostly. He was a personal friend of Martin Luther King's, and spent almost 40 years trying to find the truth of the matter of who assasinated the civil rights leader. It was all very interesting, and Dan bought a copy of his book, An Act of State. I look forward to reading it sometime in the future...when I've gotten through my zillion other books, of course. But still - I would like to read it, and I do plan to.

Not much other news right now, except for that Dan & I went to Shag on Saturday to get our hair cut. I also got mine colored (a slightly darker brown, with some reddish in it); I took a picture, but it doesn't really do it justice. I took a few more photos on Dan's camera, but I don't have those yet. If I'm happy enough with any of them (which I probably won't be; I'm terribly un-photogenic), then perhaps I'll post those up sometime later - they show my cut better. For now, though, here: 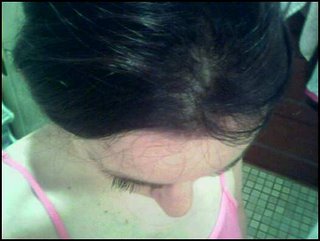 All right - now, back to work! xoxo